I am married to a man who operates heavy dirt moving equipment for a living - equipment like bulldozers and backhoes. In other words - he moves dirt. Here’s the proof. 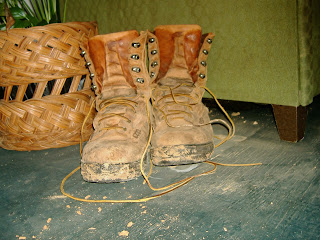 These boots have been the cause of one cat tale, a piece of art and many trips and stumbles. They are BIG and they are parked on our back porch when they are this dirty.

As a matter of fact there have been times he was so dirty he has left all his clothes out there. (Is that more than you wanted to know?) When you move as much dirt as he does, you can’t help but get a little on you - or a lot. I have been known to take his jeans outside and beat them on the fence to knock off all the dirt clods. I have also laid them on the grass and turned the garden hose on them.

The nice thing about clothes that are dirty with just dirt is that it is - just dirt. It’s not greasy or oily, it’s not stained with stuff like grass. And just dirt washes out pretty easy - after the beating and hosing. The dirt around here is usually either a pale brown or reddish brown.

It helps to know I am not alone. There must be millions of men who move dirt for a living. And you know behind everyone of those men there is probably a woman like me - cleaning up the mess. Yes - it is a dirty job and someone has to do it. (I’m sorry. I just had to say that.)

Moving dirt is actually a very important part of the world we live in. Just about anything you are going to build outside requires the moving of dirt. Ex: roads, buildings, dams, bridges, houses, - I could go on and on. And there are a lot industries that revolve around dirt. Ex: heavy equipment; garden equipment like shovels and hoes; bath soaps, dish soaps and laundry detergents; vacuum cleaners and dusting equipment; etc.

I have come to accept the dirt.
And when it comes time to replace our kitchen floor and carpet I need to pick something that is pale brown or reddish brown.

Email ThisBlogThis!Share to TwitterShare to FacebookShare to Pinterest
Labels: I Love My Husband